A-Z Content, Page Guide
ABC-ÇDEFGHI-İJKLMNO-ÖPRS-ŞTU-ÜVWYZ
"
A
B
C-Ç
D
E
F
G
H
I-İ
J
K
L
M
N
O-Ö
P
R
S-Ş
T
U-Ü
V
W
Y
Z
“
1
2
Fish, Fishing, and Fish Stories From Antiquity
The Mediterranean Sea is a very important in terms of its rich and diverse ﬁsh resources. In particular, the journey of migratory ﬁsh in schools from one sea to another can be followed even with the naked eye from time to time. The processes and activities that various species of ﬁsh or sea creatures undergo throughout this journey to reach the dinner table led to the emergence of ﬁshing as a commercial venture. While ﬁsh were caught using diﬀerent means in ancient times, today this need can be met by “ﬁsh farms.”

The fossils of ﬁsh and other sea creatures as well as ﬁshing hooks and similar tools dating to the Prehistoric period (ca. 40.000-10.000 BC) have been found in archaeological excavations. Wall and vase paintings, reliefs and archaeological ﬁnds from Near Eastern civilizations such as Mesopotamia and Egypt, where the ﬁrst states emerged (Bronze Age, ca. 3000-1200 BC), provide a rich picture of the diversity of ﬁsh and ﬁshing in that period. The seas that surround Anatolia – Black, Marmara, Aegean and Mediterranean – as well as the straits that connect these seas, were very important food sources for both Anatolia and other surrounding civilizations. Undoubtedly, settlements far from the sea were able to meet their ﬁsh needs from those in freshwater lakes and rivers.

The Minoan and Mycenaean civilizations (3rd and 2nd millennium BC), which ﬂourished in the Aegean world, produced wall and vase paintings that present the most beautiful repertoire of sea creatures in the Aegean and the Mediterranean Seas. Likewise, the art of the Mycenaean civilization (2nd millennium BC), which ﬂourished in Greece, is also very rich and interesting in its depiction of sea creatures. Regarding the ancient Greek and Roman civilizations, our knowledge of ﬁsh and ﬁsheries increases, for ﬁshing had become an industry. Literary sources inform us about various topics such as ﬁshing, ﬁsh recipes, serving ﬁsh, preserving ﬁsh as canned food, ﬁsh sauces, and ﬁsh importing and exporting. Mosaics of the Roman Imperial period reveal the ﬁsh repertoire of the period, and scenes related to ﬁshing are almost like photo frames.

This exhibition takes you on a short journey through our seas in Antiquity. You will meet diﬀerent types of sea creatures such as ﬁsh, dolphins, mussels and snails, and hear their stories. You will ﬁnd answers to many questions about how they were caught and consumed as food. 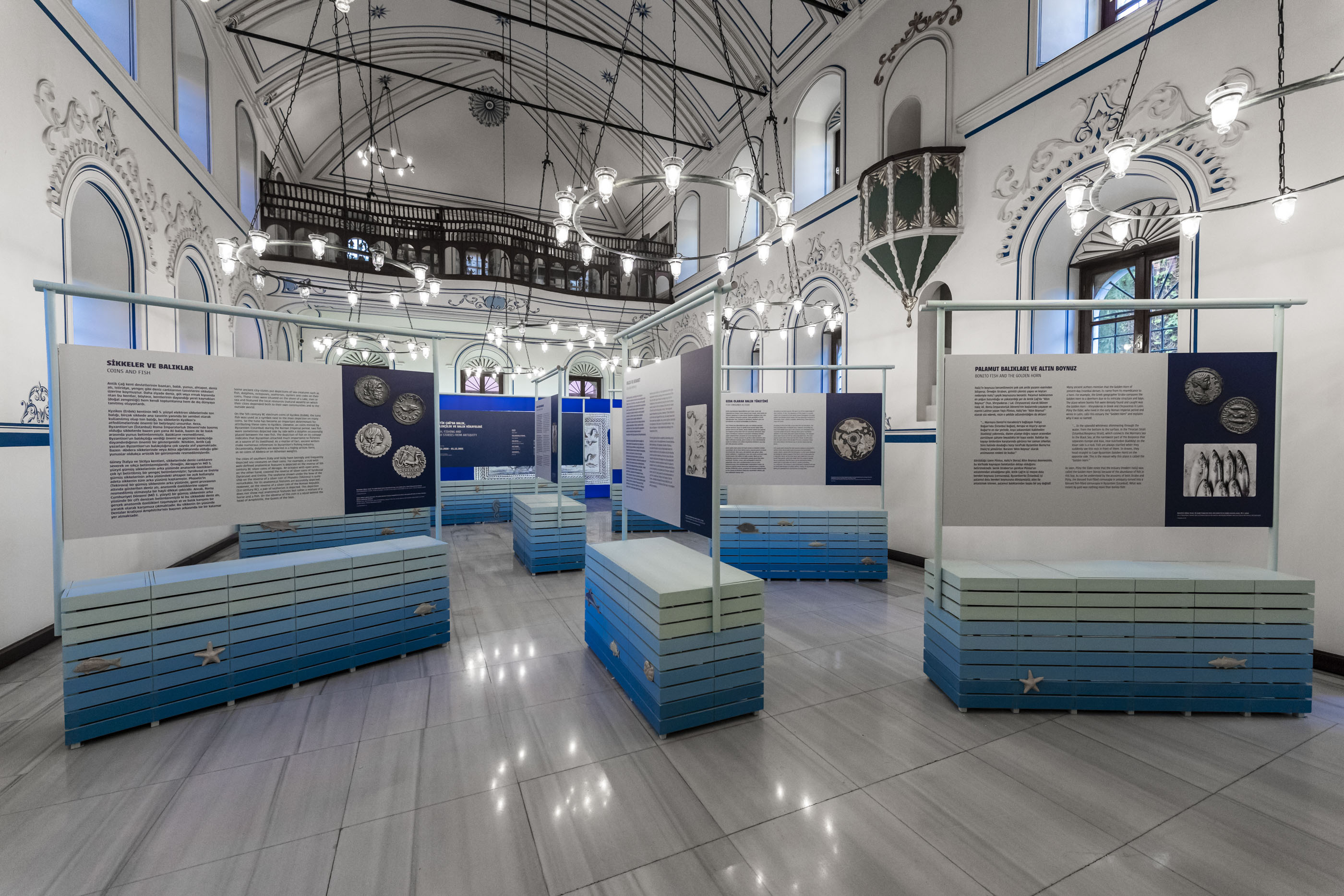 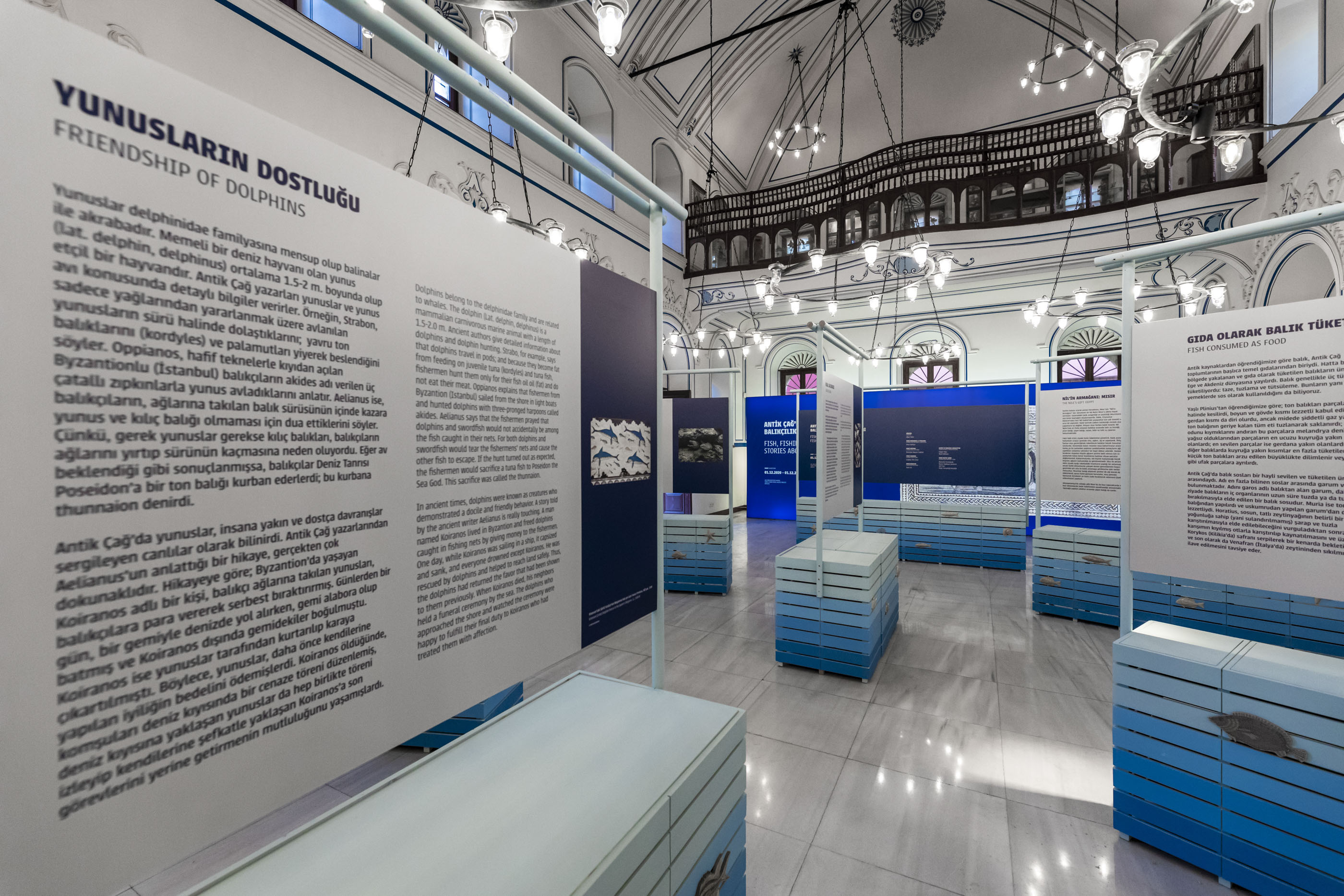 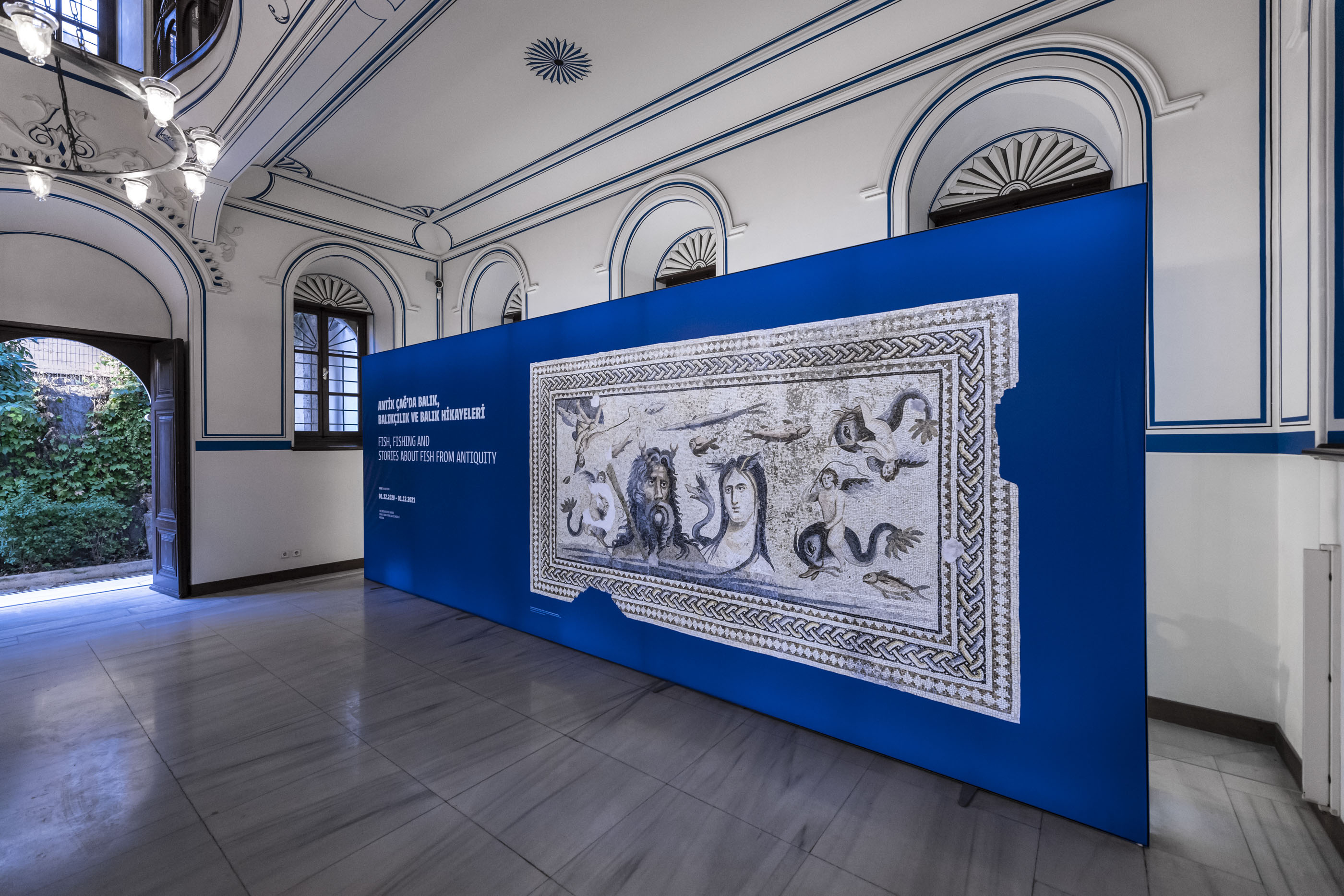 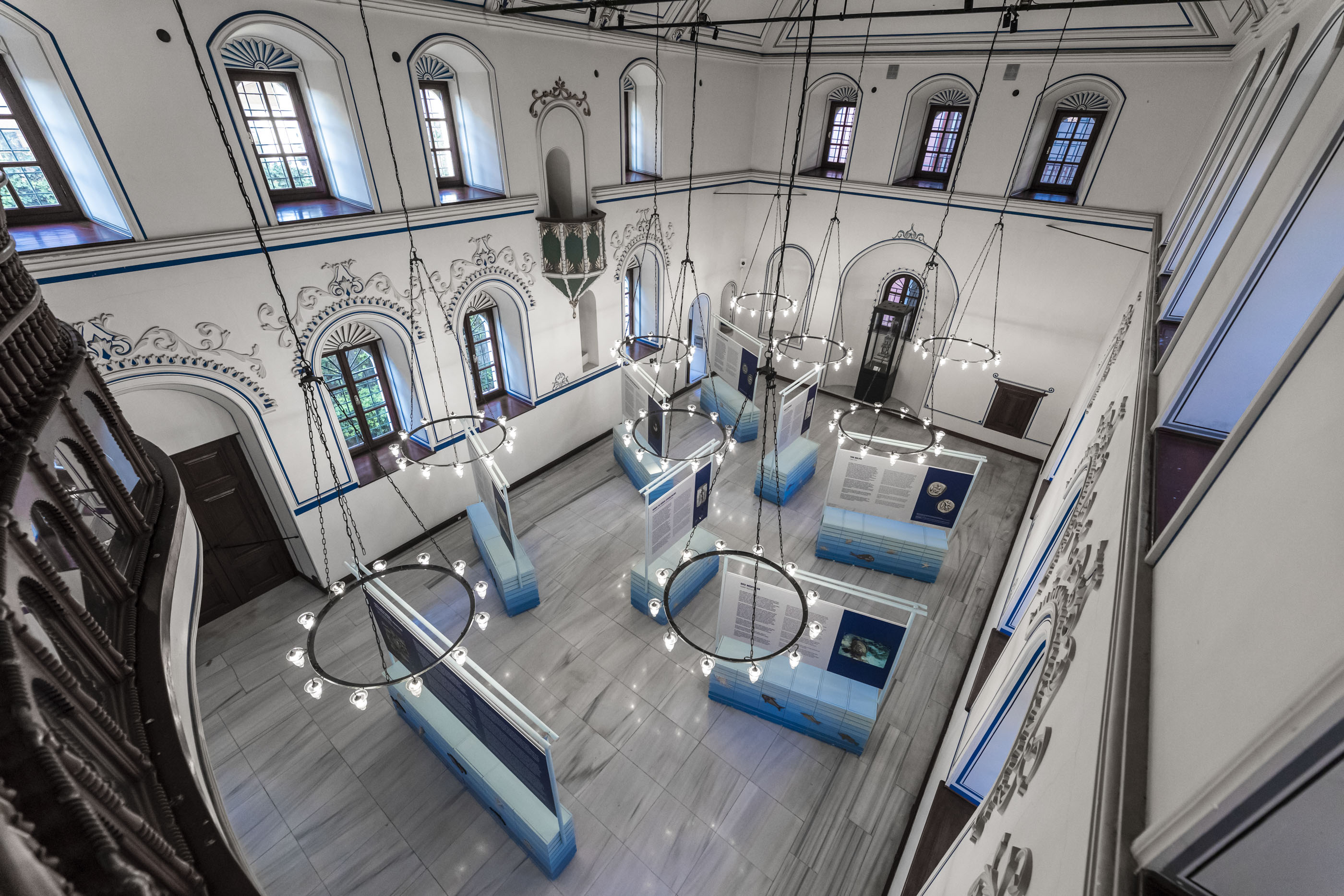 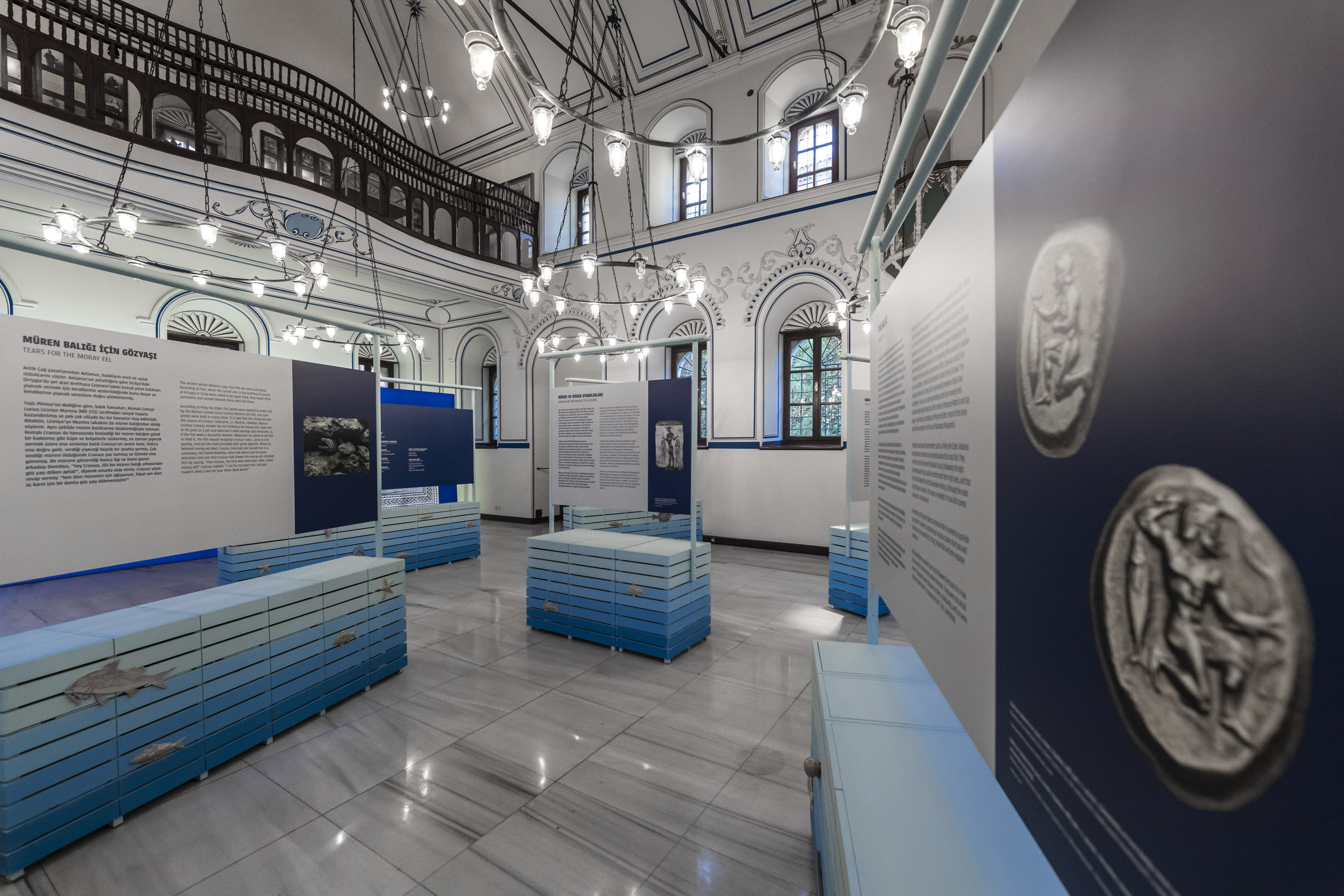 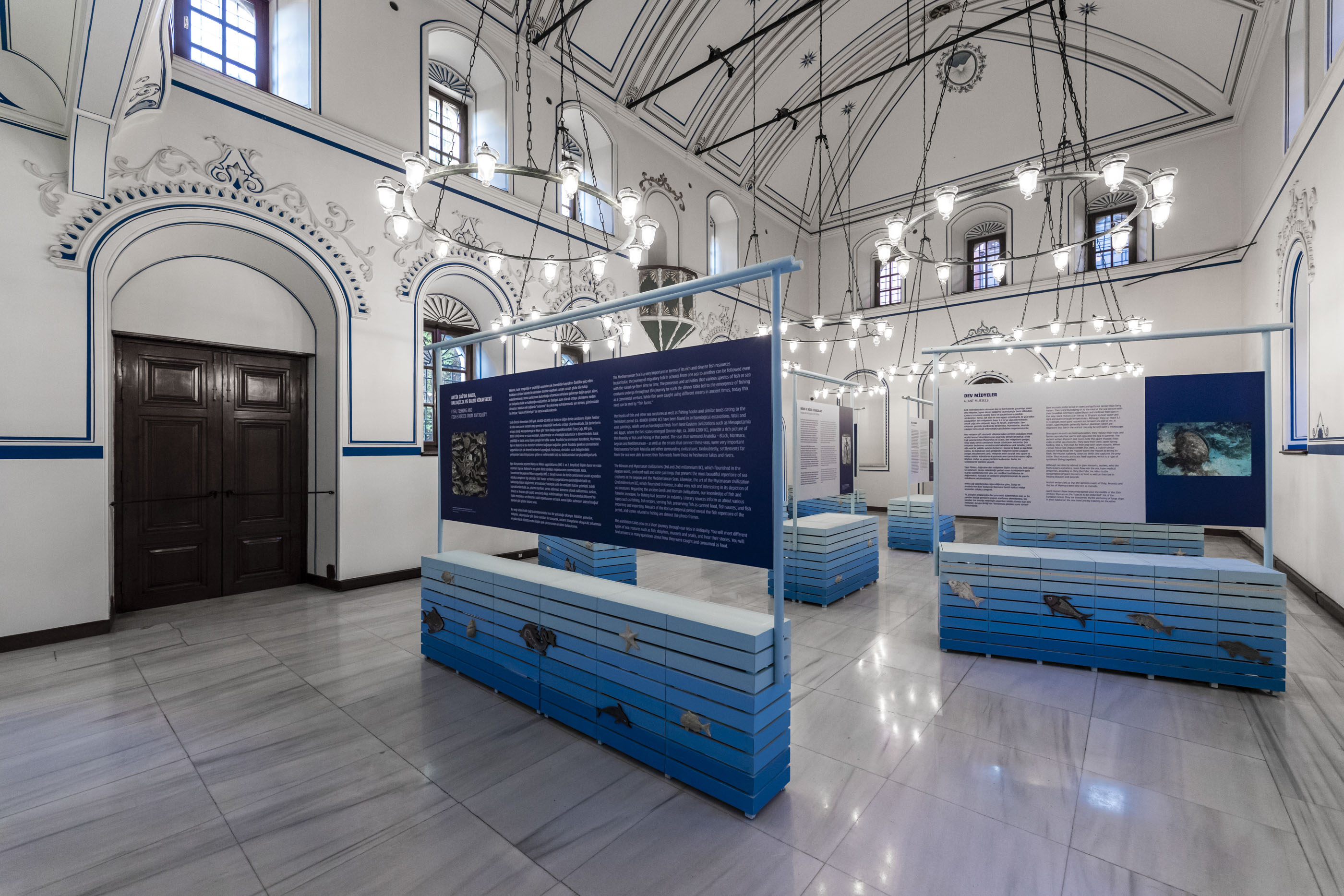