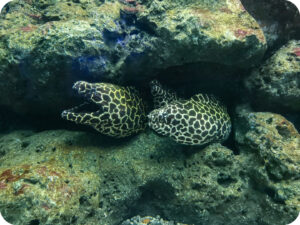 The ancient writer Aelianus says that fish are tame and docile. According to him, when the sacred eels in the Arethusa Fountain at Ortygia in Sicily were called to be given food, they heard these summons and turned towards those who fed them.

According to Pliny, the Elder, fish ponds were opened to public life by the Roman Consul Lucius Licinius Murena (151 BC), and such ponds were built in many villas. It is said that the moray eel was the source of Licinius’ nickname, i.e. Murena. Likewise, Marcus Licinius Crassus, known for his fondness for moray eels, kept one in his pool as a pet and adorned it with earrings and necklaces, as if the fish were a beautiful woman. Whenever he called to the fish to feed it, the fish would recognize Crassus’ voice, come to him quickly, and eat the food provided with great appetite. When his beloved moray eel died, Crassus mourned and buried him in a ceremony. His friend Domitius, who had witnessed the great attention and care that Crassus had shown the moray eel, mocked him by saying, “Hey Crassus, the fool who shed tears after a dead moray eel!” Crassus replied: “I cry for my dead moray eels, but you haven’t shed a tear for your three dead wives!”