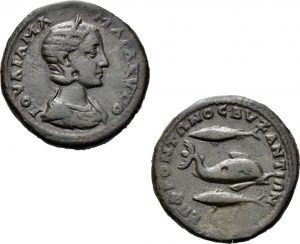 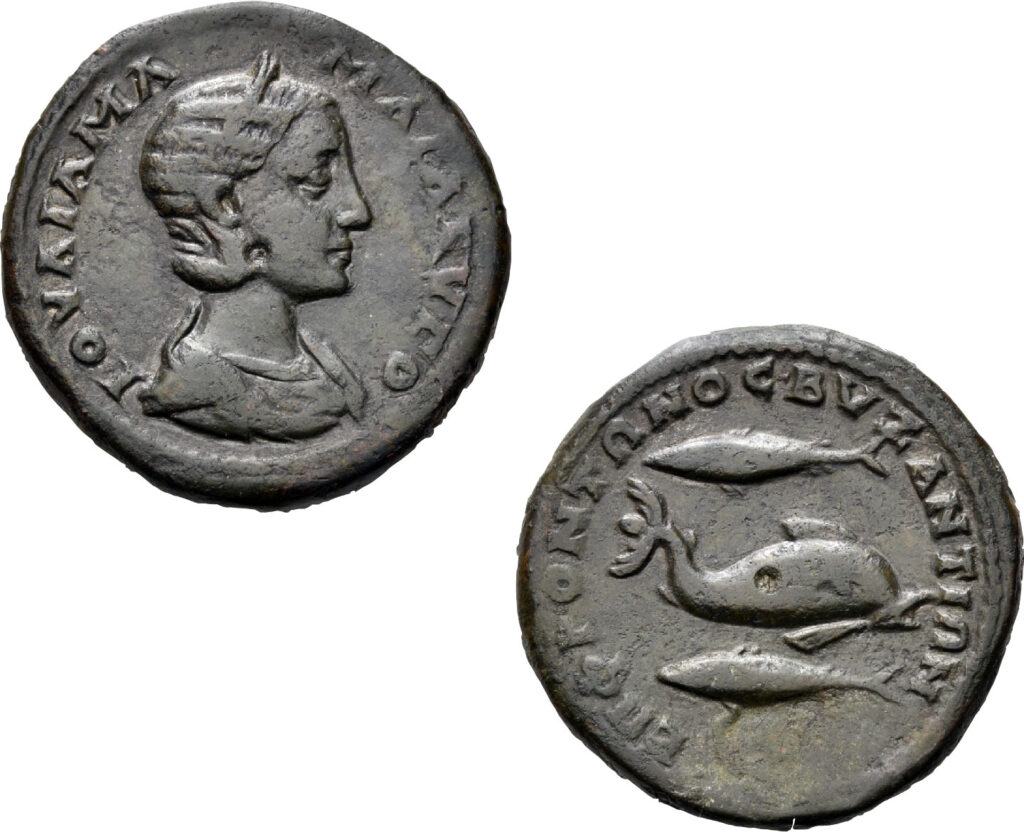 Coin of Byzantion, bronze. Bust of the Empress Julia Mamaea on the obverse and dolphin between two tuna fish on the reverse. 3rd century AD

Fishing was one of the most important natural sources of income for
states in antiquity. Intensive fishing in the Bosphorus (Istanbul Strait),
upon which Byzantion (Istanbul) was established, undoubtedly led to
the formation of a fish industry in the city. Byzantion also increased its
prosperity through the income obtained from fish. Although the residents
obtained fish mainly from the Bosphorus, they also obtained fish from
lakes near the city and possibly from rivers too. Fishing was such an
important sector in Byzantion that Aristotle in his work Politics mentions
a class in Byzantion’s society comprised of fishermen. Strabo states
that Byzantion was third in fishing. Dio Chrysostom, a writer of 1st-2nd
century AD, says that the city’s residents exploited the advantage of their
location on the Bosphorus and the sea as much as possible. The fish even
came right up to their feet so they did not require any extra effort to catch
them. In a work named Deipnosophistai by Athenaios, who lived in the
2nd century AD, Byzantion is called the “metropolis of tuna.”

Among the most common fish in the Bosphorus are tuna, bonito and
mackerel. All of these fish are migratory. In addition to these, mullet,
swordfish, dolphin, sturgeon and parrot fish are among the fish
mentioned in ancient sources related to Byzantion or the Bosphorus.

Byzantion also held the salt monopoly. The production of tarichos,
or salted fish, required large amounts of salt. According to Pseudo-
Aristotle, writing in the middle of the 4th century BC, because the salt
trade was very important for fishing and brine in Byzantion, it was
under the state monopoly.