Çanakkale is located in the northwestern part of Asiatic Türkiye along the narrow strait known as Dardanelles or Hellespont in antiquity but as the Çanakkale Boğazı today. In spite of prehistoric settlements in the environs, Çanakkale is a very young settlement that developed around the Kale-i Sultaniye, the “Sultan’s Fortress,” built by Mehmed II (the Conqueror) in 1463 in order to control the sea traffic along the Dardanelles.

The town that developed around this small fortress had about two thousand well-kept houses with tile roofs surrounded by vineyards and orchards in the mid-seventeenth century, according to Evliya Çelebi’s account.

Çanakkale became an important pottery and tile production centre that introduced innovations for themes, designs and inventions from the seventeenth century to the first quarter of the twentieth century. Western visitors to Çanakkale in the eighteenth and nineteenth centuries discuss the tile manufacturing industry and trade in their travel narratives.

British anthropologist Richard Pococke writes in his book published in 1745: “The town on the north side of the castle is a mile and a half in circumference, and has in it twelve hundred houses, two hundred of which are Greeks, a hundred Armenian, and fifty Jews. They have a great manufacture both here and on the other side, of cotton and sail-cloth; and they make here a sort of ware like that of Delft, which is exported to the value of fifteen thousand dollars a year: They also send out some wax, oil, wool, cotton, and cotton yarn; and build small ships”.

The English traveller Richard Chandler, who visited the town in 1764, also mentions the large pottery industry in his Travels in Asia Minor.

With the increasing production and trade of and input from the pottery, the Kale-i Sultaniye came to be called Çanak Kalesi, i.e. “fortress of pottery”. This name is for the first time attested in a description by English antiquary James Dallaway published in 1797. Dallaway mentions the production of “coarse pottery, rudely painted and gilded” in Çanak Kalesi. His account seems to indicate a decline in the quality of the pottery produced.

English botanist John Sibthorp states in 1820 that some workshops continued fine quality production and that masters painted the wares with great skill but after painting the wares were not fired. This kind of painted decoration is the overglaze décor typically found on Çanakkale pottery in its late phase.

In 1836 Marshall Helmuth von Moltke writes that the town in the shade of plane trees surrounded with orchards was called Çanak Kalesi by the Turks due to the high number of pottery workshops and that the Pasha of the Strait resided here.

English traveller and scholar Albert Smith, stopping at the town about 1850, tells that the small town by the old fortress was called Çanak Kalesi by the Turks. Local merchants came in small boats to the big ships and brought with them numerous rude pottery for sale. Most of the wares were tall but not ungraceful water-jugs ornamented with gold-leaf. Smith bought a bottle made like a stag for a friend, and he writes that this was the ugliest thing he had ever seen in his life. He also provides the drawings of a water-jug and a horse-shaped vessel.

The French traveller J. H. A. Ubicini reports in 1855 that the town was called Çanak Kalesi because pottery was produced here for long time, as at that time. The city’s products were shipped to Istanbul, but they did not have a great value.

On the other hand, French traveller and orientalist Vital Cuinet gives the population of the town as 11,602 in the late nineteenth century and underlines that pottery workshops lost their importance due to rivalry from European markets, but they were still part of the exports.

The American author Charles Dudley Warner narrates, in his book published in 1876, “Chanak Kalesi is a town of a couple of thousand houses, gayly painted and decorated in lively colors, lies upon a sandy flat and presents a very cheerful appearance. It is a great Asiatic entrepôt for European products, and consular flags attest its commercial importance. When I came upon deck its enterprising traders had already boarded the steamer, and encumbered it with their pottery, which found a ready market with the pilgrims, for it is both cheap and ugly. Perhaps we should rather say fantastic than ugly. You see specimens of it all over the East, and in the bazaars of Cairo, Jerusalem, and Damascus it may be offered you as something rare. Whatever the vessel is, –a pitcher, cup, vase, jar, or cream-pot, – its form is either that of some impossible animal, some griffin, or dragon, or dog of the underworld, or its spout is the neck and head of some fantastic monster. The ware is painted in the most startling reds, greens, yellows, and blacks, and sometimes gilt, and then glazed. It is altogether hideous, and fascinating enough to drive the majolica out of favour”.

Lady Harriot Dufferin, wife of Lord Dufferin ambassador to Istanbul in the early twentieth century, writes about the production of cheap pottery here reminiscent of Valauri examples. She adds that, although they bought only one sterling pound worth of them, they received, in fact, so many– enough to fill many empty spots at the Embassy.

Souvenirs and gifts of Çanakkale pottery entered the collections of the Sevres Porcelain Museum in Paris, the Victoria and Albert Museum in London, and the Benaki Museum in Athens as well as some other private collections.

Thus, it is understood that pottery with curious forms and little decoration, partially glazed, usually fired at low temperatures, and still produced in Anatolia today, has been produced at Çanakkale for a long time. However, based on the accounts of Western travellers and officers, the earliest examples can be dated to the early 1700s.

From the late seventeenth to the late eighteenth century Çanakkale pottery with its high quality, curious designs, stylised and impressive compositions was the product of a fine artistic understanding. These early examples were mostly large and deep bowls, plates and jars. Abstract flowers, fish, sailing ships, mosques, and mansions were applied in purple, brown, orange and white with a few basic brush strokes under a clear glaze. The creative imagination of the artist and fine taste of the composition are very impressive.

Products of the nineteenth century as well as the first half of the twentieth century are marked by a degeneration in quality and style. Crude, disproportioned and strange attempts were inspired by the Western products of the time. The form and function of this repertory is very wide encompassing jars, ewers, jugs, sugar bowls, braziers, candlesticks, teapots, vinegar bottles, and animal- or human-shaped baubles. These were mostly coarse products, cumbersome and of inferior gracefulness with variegated paint and glaze techniques. These curious products – decorated exaggeratedly with rosettes, garlands, leaves, flowers, basket weaves, and animal figures in barbotine or appliqué techniques, quite baroque in character – were very popular.

A large group of late-period examples is comprised of vessels in the shape of ships, animals and humans. Animal statuettes are in the form of water jugs, which can be filled from a hole on the back and emptied from a spout that forms the mouth of the animal. Despite their amateurish and disproportionate forms, these vessels are quite attractive.

The porous clay used in production is usually red, sometimes beige. Slip and glaze are applied most of the time. Some examples characteristically have green, brown or cream coloured glaze. Décor in various colours or gold wash was applied under or over the glaze depending on the fashion of the time.

The pottery of Çanakkale can be placed in between the traditional art of pottery and that of the Ottoman period. It was popularly sought after in a certain period and spread across a vast geography as souvenirs, thanks to the location of the town. With the increasing interest in Çanakkale pottery by museums and private collectors recently, new and different products are coming to the market.

The Çanakkale pottery collection of the Suna & İnan Kıraç Kaleiçi Museum is one of the richest in terms of quantity, time period, types and variety of form. 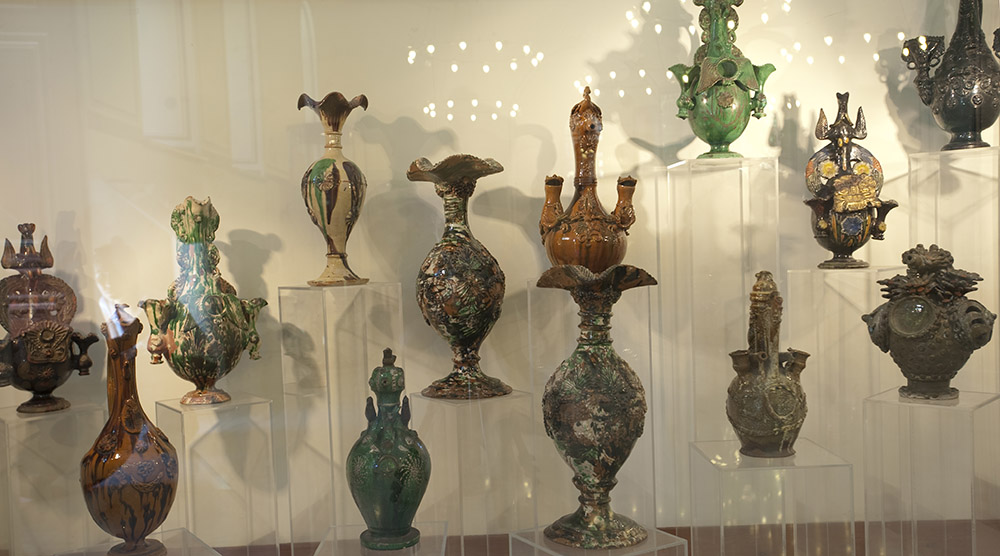 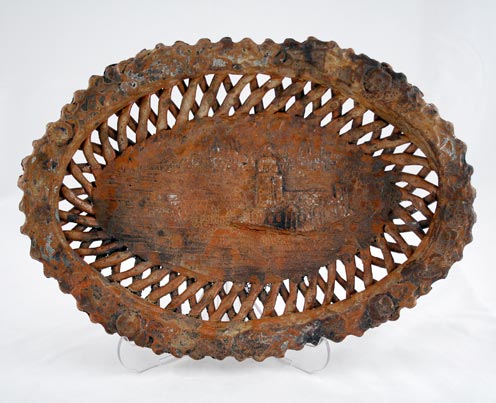 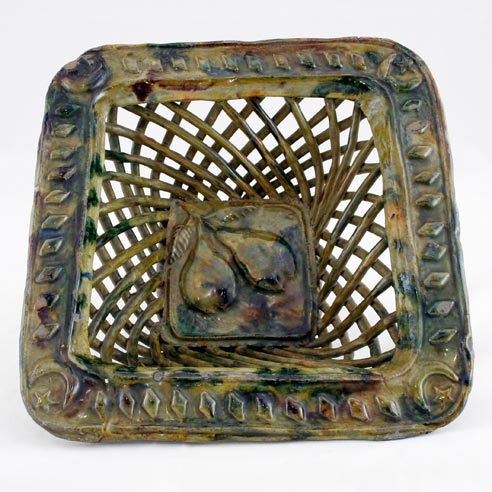 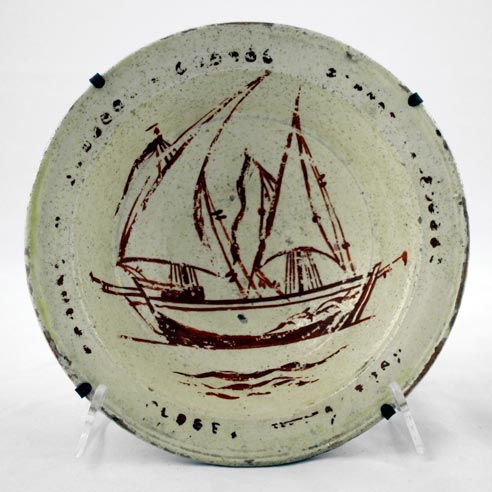 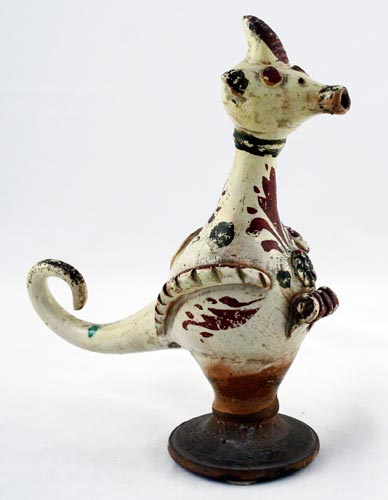 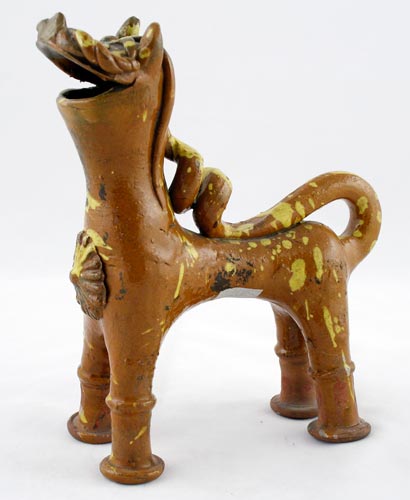 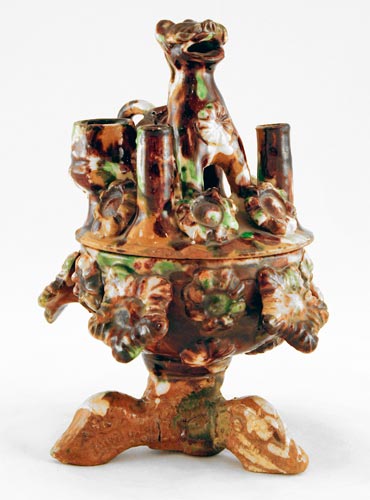 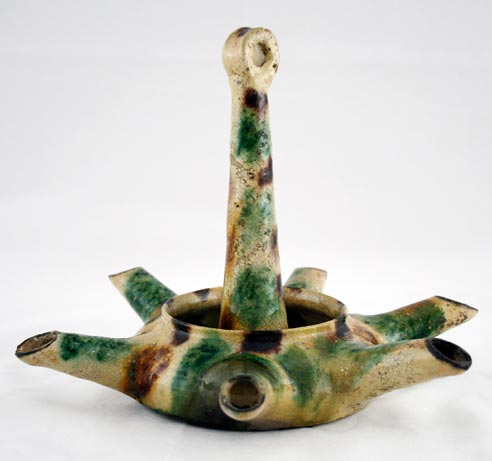 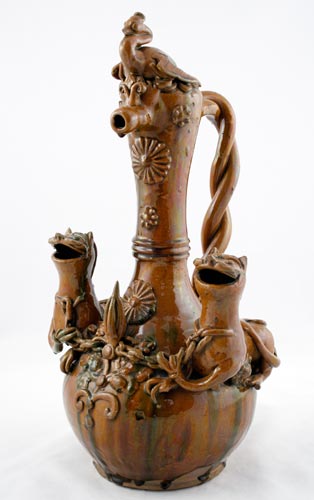 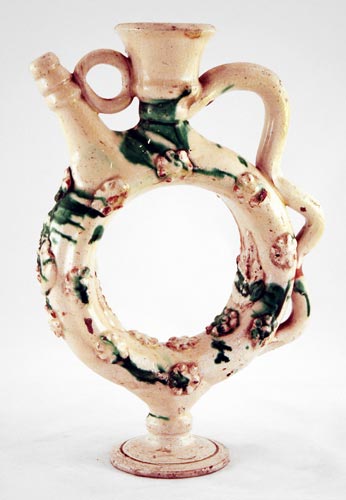 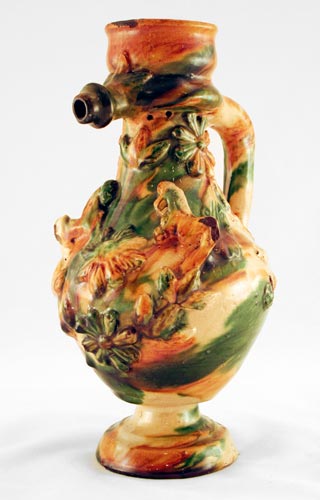